This game was made for the GoNetPlay3 game jam.

Playing the judge (or other players) instruction:

Players will work together to fight against horde of enemies. You need to use the right element to vanquish enemies.

Fire is strong against Earth but weak against Water

Earth is strong against Water but weak against Fire

Water is strong against Fire but weak against Earth

Theme, Mechanic & How To Connect:

Fantasy is a genre of speculative fiction set in a fictional universe, often without any locations, events, or people referencing the real world

Mage Blast places the player in a world of Magic where you have to use spells to defeat elemental spirits that want to drain the power you have taken from the land.

Must use both keyboard and mouse to control the game.

Players control the player with the mouse for aiming and using spells while using the keyboard for directional movement.

Click on the link above to start the game.

When the game has started click on the "Start" button.

Wait until another player joins. The game will start automatically when a second player is in the game.

The game waits 20 seconds to let more players join (up to 4 players per game). 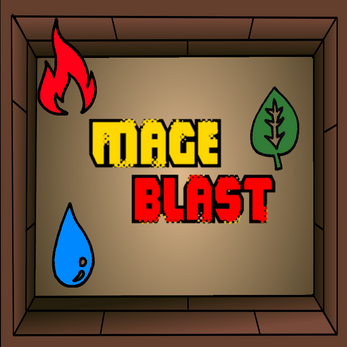